Saint Mary of the Angels

This article deals with a real world topic.
It may be integrated into Dresden Files in part or not at all.

Saint Mary of the Angels

Saint Mary of the Angels[Footnote 1] is a Roman Catholic church in Bucktown, Chicago. Saint Mary's was first seen in Grave Peril. 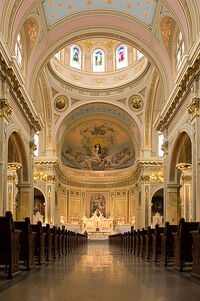 Saint Mary of the Angels is the church of Father Forthill. The church is often used as a sanctuary from supernatural threats. It's located at the corner of Bloomingdale and Wood, down by Wicker Park.[1]

St. Mary of the Angels is a historic Roman Catholic church originally founded in 1899. Its architecture is built in the Polish Cathedral style and mimics the layout of St. Peter's Basilica in Rome. It is constructed of red brick with white marble accents. It has two bell towers and a large dome which is about seventeen stories high. The elaborate decorations include angelic statues on the roof and ledges. Its artistry, size, and beauty are impressive. The church takes up an entire city block, and it's enormous proportions are commented upon more than once in the series. According to Harry Dresden, St. Mary's is "more than a church. It is a monument". He senses a quiet power, deep, warm and reassuring.[2]

In Grave Peril, Harry Dresden sends Lydia, who is afraid of a hostile spirit, there to seek protection.[1] Later, Michael Carpenter takes him to the church. There, they discover that something tried to get inside all night and had smashed several cars in the parking lot.[3]

In "Something Borrowed", Georgia and Billy Borden got properly married in St. Mary by Father Forthill, after their planned big wedding in the Lincolnshire Marriott Resort Hotel had been invaded by Jenny Greenteeth.[4]

In Proven Guilty, Harry Dresden, Thomas Raith and Mouse help Charity Carpenter bring the children to the church after an attack by phobophages on the Carpenter home. Dresden had already sent Nelson Lenhardt there earlier that evening. When Nelson had called, he seemed extremely frightened, saying that something was following him. While there, Dresden uses his Sight on Nelson and Daniel Carpenter and finds that both have been psychically attacked by the phobophages. He also Sees that Nelson has two tiny, neat round holes in his temples just like Rosanna Marcella. Dresden puts things together and deduces that Molly Carpenter is responsible for the tiny, neat holes in Nelson and Rosanna in order to help them with their addictions. And that Molly may be somehow responsible for the phobophages. Dresden struggles with his guilt over unknowingly diverting the phages back at Molly. Father Forthill (aware of the supernatural) lends an ear and offers consolation. Up in the top pew of the empty Chapel's balcony, Dresden has a long talk with Charity Carpenter, Molly's mother. She once had magical talent but she let it wither and die; the magic has passed on to Molly. Molly is not the one who summoned the phages, they were sent from the Nevernever via mirrors using Molly as a beacon by an as yet unknown entity. A Fetch (a phobophage) from the Winter Court has Molly at Arctis Tor in Faerie. Dresden and Charity plan how to rescue Molly.[5]

In Small Favor, Harry Dresden and Thomas Raith meet Michael Carpenter and Sanya at the church where they are all to meet Rosanna, the Denarian, to be taken to the rendezvous place to get Ivy.[6]

In The Warrior, Harry Dresden pays Father Forthill a visit about his scrape with Father Douglas.[7]

In Changes, Molly Carpenter and Sanya take Harry Dresden to the church after his back is broken. Desperate, Dresden summons Uriel who declines helping him.[8] Dresden then summons Mab with whom he makes a deal to become the Winter Knight in exchange for healing, strength and aid to save his daughter.[9] When Dresden comes to, gunman Stevie D tries to assassinate him, so he freezes the gun with his new Winter powers.[10] Later, the church is used as a staging place for Dresden's rescue team.[11] At the end of their rescue, they are returned there directly through a Way created by Donar Vadderung and arranged by the Leanansidhe.[12]

In Ghost Story, Harry Dresden's ghost takes Fitz to Father Forthill at Saint Mary's to get food and cleaned up. Father Paolo answered the door, then left to get Forthill. Forthill asks Dresden to prove it's him—he does so by having Fitz knock on the wall where his secret compartment is. Dresden finds him in the kitchen. Sensing him, Forthill talks to Dresden's ghost reassuring him about Fitz.[13]